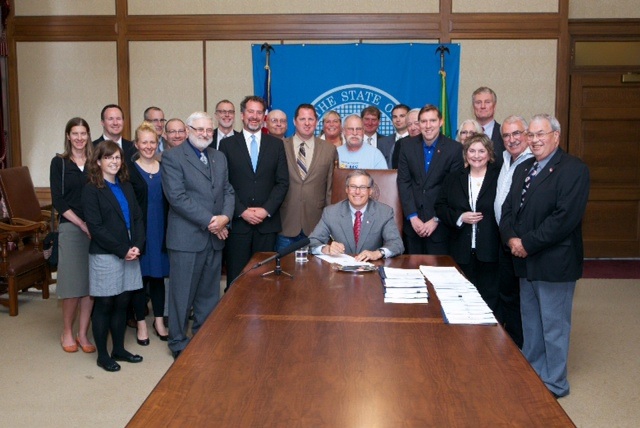 Olympia – Washington State advances a more collaborative approach to deal with pressing issues facing the Pacific coast. On May 21, 2013, Washington Governor Jay Inslee signed legislation to create the Washington Coastal Marine Advisory Council (WCMAC) under the executive office of the governor. This council convenes stakeholders and managers to advise the State on issues facing the state?s marine waters and shorelines along the Pacific coast.
“This is a big step toward stronger recognition of coastal community interests,” said Dale Beasley, President of the Columbia River Crab Fishermen’s Association. “Many of us on the coast have been pushing the State to take a stronger role in collaboratively managing our valuable coastal resources. In Pacific and Grays Harbor counties, over 30 percent of all the jobs are dependent on marine resources.”
A broad coalition of coastal stakeholders, co-managers and scientists worked to design the new council and then coastal commercial and recreational fisherman led the charge to formalize the body under the executive office of the governor with support from the Surfrider Foundation, the Nature Conservancy and business interests.
“Washington’s Pacific Coast lags far behind other coastal states and Puget Sound when it comes to collaborative management and conservation of ocean and coastal resources,” said Surfrider Foundation Policy Manager, Jody Kennedy. “When you consider how remarkable and valuable our Pacific coastline is for state residents and coastal communities, protecting coastal marine resources should be a priority for the State,” Kennedy added.
Members on the Council represent ocean and coastal interests for the Pacific coast, including commercial fishing, shellfish growers, conservation, science, ports, recreation and economic development. Each coastal marine resources committee has a seat. Under the new legislation, State agencies also have seats and federal, tribal and local governments are invited to participate.
One of the first issues the WCMAC will tackle is assisting state agencies with Marine Spatial Planning in order to protect existing jobs and healthy coastal ecosystems from new competing demands on ocean resources.
“The signing of Senate Bill 5603 to establish the Washington Coastal Marine Advisory Council, represents a significant advancement for the representation of coastal communities in the Marine Spatial Planning process and in the planning and regulation of coastal affairs. It provides us a greater degree of access and influence that many people have been striving to achieve for a long time”, said Doug Kess, the Chair of the Washington Marine Advisory Council.
“Right now, funding to support Marine Spatial Planning on Washington’s coast is uncertain as the State Legislature continues to grapple with budget negotiations,” said Paul Dye, the Washington Marine Director for The Nature Conservancy.  “A diverse coalition of coastal stakeholders, including conservationists, shellfish growers and fishermen are advocating hard for Marine Spatial Planning funding and we hope that legislators are listening,” added Paul.