Prev Post Share Next Post
facebook twitter email
Washington State has continued it’s international leadership in addressing the challenge of changing ocean chemistry, more commonly known as Ocean Acidification. With the recent release of the Addendum to the original 2012 Blue Ribbon Report: From Knowledge to Action, our local actions continue to garner attention in addressing this global challenge. Here is some of the latest coverage. Seaweed may be thought of as a nuisance, but an increasing number of fishermen, scientists and consumers are seeing it as a solution: At this kelp farm across the country in the waters outside Seattle, producing food is almost beside the point. This is a test farm, where Betsy Peabody of the Puget Sound Restoration Fund and a team of scientists are doing an experiment to see whether seaweed can help fight the growing problem of ocean acidification — caused mainly by increasing carbon dioxide levels in the seas. Read more and check out the piece that was featured on 60 Minutes.

Yacht in global race gathering data on ocean’s health: Scientist’s are racing to learn more about ocean acidification and now they’re getting help from an actual race boat. The Clipper “Round the World” yacht race has joined forces with researchers in Washington. On the next leg from Seattle to New York City, the yacht “Visit Seattle” will have a pH sensor attached to it. It will take readings throughout the journey. The effort was spearheaded by Seattle Port Commissioner Fred Felleman, whose idea took a year to materialize. Felleman has often championed issues related to water quality and the health of orcas, in particular. Check out the short clip on KING5 We’re all in this leaking canoe together in our efforts to address climate impacts like OA…that’s why collaboration is key. Huge thanks to Ken Cambell and Citizens for a Healthy Bay for taking the crew out to the Maury Island site for a recent sensor deployment.

In the five years since Washington’s Blue Ribbon Panel’s 2012 recommendations, there have been significant scientific advances. The Marine Resources Advisory Council (which includes WA Surfrider Policy Manager Gus Gates as the representative of ocean recreation) saw a need to re-evaluate the 2012 strategy, resulting in this 2017 Addendum to the Blue Ribbon Panel’s 2012 report. The Addendum recently released is a companion report that expands upon the 2012 work.

“Ocean acidification threatens Washington shellfish, fisheries industries, and the coastal communities that depend on them,” stated Governor Jay Inslee. “Our state is on the front lines of responding to these threats through the leadership of the Blue Ribbon Panel on Ocean Acidification and the Marine Resources Advisory Council. We must keep up the momentum and leadership and continue to take bold action to protect these resources for future generations.”

The action plan is held up as an example, not only across the country but across the globe, as an example of how to move from problem to solution and from policy to action. As Washington looks forward, they continue to innovate. From investigating blue carbon, kelp cultivation, and shell recycling opportunities to supporting development of state-of-the-art ocean acidification monitoring equipment, they’re looking at every available possibility to take a strong stand against ocean acidification. With the action plan in hand, it has also created the opportunity for new dialogue and partnership among a wide variety of players,  leveraging the knowledge, finances, and resources to be forward-thinking and holistic in their efforts.

It is well understood that increased global carbon emissions are the root cause of ocean acidification. However, the latest research shows that local, land-based pollution and natural processes, such as stormwater and other types of polluted runoff, also play a role in the increasing acidity of our waters. This is why more Ocean Friendly Gardens are needed throughout our watersheds to act like a sponge and filter the harmful pollutants before entering our watersheds and ocean. When seawater becomes more acidified, oysters, clams, mussels and other species have trouble building the shells needed for survival. Scientists today expect ocean acidification to impact many other species that the region depends on, such as salmon and Dungeness crab. 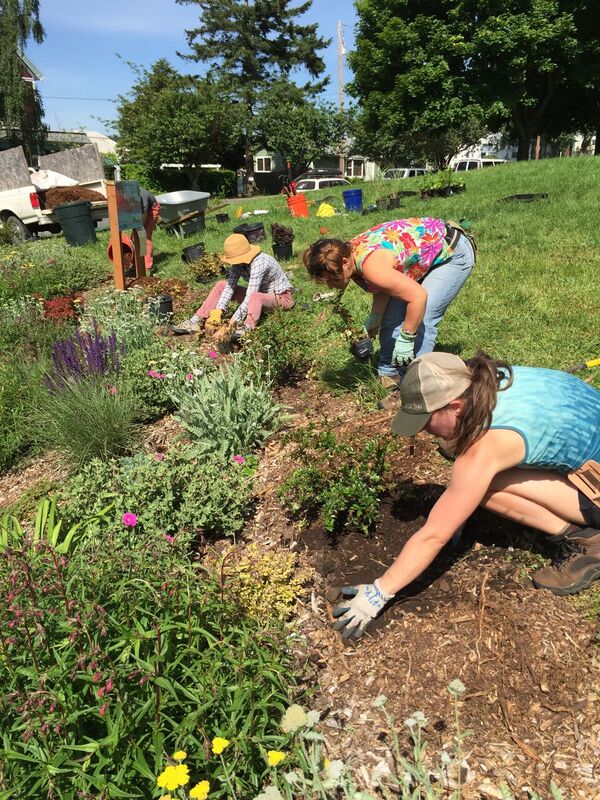 “As a scientist, it is impressive to see so much leadership in our state and also partnering between individuals from science, policy, industry, and management perspectives. As well, there is strong partnering among scientists. This collaboration, coupled with information sharing via this report, ensures an efficient use of funds and a wise pathway to actions.” -Jan Newton, UW oceanographer and co-director, Washington Ocean Acidification Center

A number of the strategies and actions to address ocean acidification were updated and clarified from the recommendations five years ago. Those updated actions fall under six overarching categories: